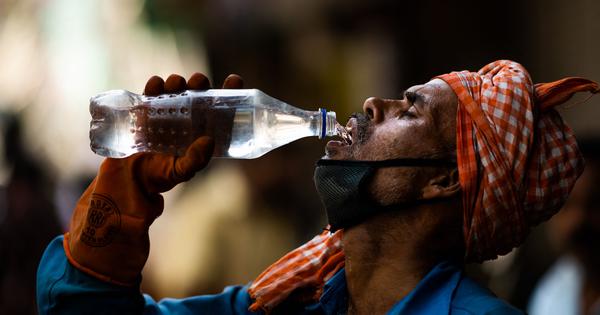 Even if global warming is contained at 1.5 degrees Celsius, deadly heatwaves are likely to become more common in India, Pakistan and Bangladesh.

On the cusp of spring, residents of Karachi, Pakistan’s largest metropolis, braced themselves for the year’s first heatwave. Mercury levels rose to 44 degrees Celsius on April 3 – the highest temperature recorded in April since 1947 – foreshadowing a brutal summer ahead.

As dry heat settled across the city, weary shopkeepers near Karachi’s Empress Market pulled down their shutters for reprieve. Din Muhammad, a 65-year-old fruit seller, doused his turban in water, his beard dripping with sweat under the afternoon sun. “I have nowhere to seek shelter in this heat,” he told The Third Pole, gesturing towards the concrete jungle before him. There was no tree cover in sight.

The Covid-19 pandemic is surging across Pakistan, with the country’s third wave bringing the total number of critical patients to 3,568 on April 4 – the highest since the outbreak began. But Din Muhammad, who spends his days under the open skies breathing in Karachi’s smoggy air, said he was more afraid the heat would take his life than the virus. “God willing, I hope I am able to survive the summer,” he said.

In many South Asian countries, heatwaves start in May and extend to September. But this year the warnings of higher temperature were issued end-March. Though no alerts have been issued in Nepal, both Bangladesh and India are already experiencing high temperatures.

On April 1, mercury levels in New Delhi hit 40.1 degrees Celsius – the highest temperature recorded in April in 76 years. The India Meteorological Department warned of “higher than usual” temperatures in most parts of the country between April and June.